An article from 2007 in The Independent on Sunday, a publication which, unlike Santa, no longer exists.

The voice sounds shrill and furious. “How did you get this number?” he or she (it is impossible to tell) squeaks down the line. “Wait!” In the background are the sounds of wrapping, tapping and humming as if a thousand people of diminished stature are at work in some cavernous underground factory.

“Good morning.” This voice is deeper, smoother, calmer and distinctly transatlantic. “Senior Elf Barnabus, vice president, communications. How may I help you, sir?”

I want to speak to Santa, I say, not quite able to believe that this conversation is happening. “Of course you do,” says Barnabus, oozing professional goodwill. “Everyone does, at this time of year. Unfortunately…”

This is different, I say quickly – I’m a reporter. Barnabus grunts, unable to disguise his disgust in the way his job surely demands he should. No, wait, I say. My eldest son, a nine-year-old called Jacob, has just declared himself an unbeliever. He says he has worked it out and Santa does not exist. So I want to prove him wrong. I want to write a piece that parents can show their doubting offspring on Christmas Eve and say: “Look, there it is, in the paper.”

Barnabus laughs. “Do you really think they’ll believe it any more after that?” But after a moment’s pause he says: “OK. Maybe this is something we can help you with at this time, sir. May I place you on hold?”

The sound of cheerful industry is replaced by a plinky-plunky tune sung by squeaky voices, like Pinky and Perky playing with a Casio keyboard (so this is what happened to those unwanted Eighties presents). “You better watch out, you better not cry …”

The song sounds more threatening than ever, but it gives me a moment to reh`earse my questions. Chief among these, of course, is how does Santa do it? All those houses (and flats, hotels, hostels and shacks), all those chimneys (and the boarded-up ones, the locked doors and windows) and all those children, all in one night. It is impossible. But that is what they used to say about going to the Moon.

There have been many attempts to blow Santa out of the sky with science, but the most popular – it is still doing the rounds by email – came from the now-defunct American magazine Spy and was first published in January 1990. It grudgingly admitted that while no known species of reindeer could fly there were still “300,000 species of living organisms yet to be classified”, so it was not quite ridiculous to imagine a kind of reindeer that only Santa knew about.

Spy had a bigger problem with the apparent impossibility of getting around the world. When its theory was first published there were two billion children in the world (that figure has since gone up by 10 per cent). With an unseasonal lack of charity, Spy ruled out Buddhist, Hindu, Jewish, Muslim and other families who would probably not be celebrating Christmas, religiously or otherwise. That left 378 million children, in an estimated 91.8 million homes.

“For each Christian household with good children,” said the article, by Richard Waller, “Santa has one thousandth of a second to park, hop out of the sleigh, jump down the chimney, fill the stockings, distribute the remaining presents under the tree, eat whatever snacks have been left, get back up the chimney, get back into the sleigh and move on to the next house.”

The resulting calculation was that the sleigh must move at 650 miles per second, or 3,000 times the speed of sound. “A conventional reindeer can run – tops – 15 miles per hour.”

The next problem was the weight of all those presents, estimated at 321,300 tons. Pulling that kind of a load would require 214,200 reindeer, apparently. Moving at 650 miles a second they would generate heat – through air resistance – in the same way a space capsule does when it re-enters the atmosphere. “The entire reindeer fleet will be vapourised within 4.26 thousandths of a second,” said Spy.

The article has generated countless rebuttals, by far the most accomplished being by Roger Highfield, author of Can Reindeer Fly? The Science of Christmas. He says the effortlessness with which Santa appears to do it is propaganda designed to “divert attention away from the most spectacular research and development outfit this planet has ever seen”.

Dr Highfield includes all the children of the world – the pagan Father Christmas did, after all, exist long before the Christian St Nicholas – in his calculations and suggests there are actually 842 million stops to be made, over a distance of 221 million miles. “I like to think,” he says, “that somewhere under the North Pole there is a handful of scientists experimenting with the latest in high-temperature materials, genetic computing technologies and warped geometries of time and space, all united by a single purpose: to make millions of children happy each and every Christmas.”

Conventional wisdom says that Santa has 24 hours to deliver all his presents. Dr Highfield argues that he actually has 48 hours, if he travels against the rotation of the Earth. There should be a series of sonic booms heard in the night sky, but there is now real technology that neutralises sound with “antisound” – an advanced form of which Santa may be pumping out from speakers on the sleigh. The acceleration involved in the journey must produce about two billion times more G-force than a jet pilot feels, but a gravitational field around the sleigh would solve that one, says Dr Highfield.

As for all that friction, the astrophysicist Knut Jorgen Roed Odegaard from Norway (where they take their Arctic neighbour very seriously) has an answer: “Santa obviously has an ion-shield of charged particles, held together by a magnetic field, surrounding his entire sleigh.”

Obviously. The technology involved must make Nasa and the Pentagon sick with envy, so it is no surprise that Santa’s annual journey is always tracked by the North American Aerospace Defense Command. Norad says it uses a spy satellite in space to pick up the glow from Rudolph’s nose. It then follows the sleigh using radar along the northern border of North America before two Canadian fighter jets are sent up to act as an escort (and make sure he is not an imposter).

Norad and its predecessor, Conad, have been doing this for more than 50 years, since the birth of radar. The cover story is that a local paper in Colorado Springs ran an advertisement for Sears Roebuck that asked children to call Santa. Unfortunately the wrong number was printed by mistake – so eager youngsters actually got through to the private hotline of Colonel Harry Shoup, the man responsible for spotting incoming Soviet missiles. He took the first call on Christmas Eve 1955, but rather than hang up or let a child down, he ordered his staff to check the radars and found that, yes, there was a trace of Santa. Last year the Norad hotline took 563,000 calls; there were 7,000 emails and a billion hits on the website that tracks the sleigh’s progress live, at noradsanta.org.

A spokesman for Norad said: “The fact that Santa Claus is more than 15 centuries old and does not appear to age is our biggest clue that he does not work within time as we know it.” Instead he “somehow functions on a different space and time continuum”. So Christmas Eve – which seems impossibly brief to us – could actually feel to him like days, weeks or months. And, of course, Christmas is celebrated on different dates by Christian traditions, which gives him yet more time.

Others are watching, too. Early last Monday morning an unusual, fast-moving fiery image was picked up by Mascot, the all-sky monitor of the Paranal Observatory in Chile. It was as large and bright as a comet but not quite fast enough to be one. The astronomers passed it off as the unannounced launch of a rocket in Japan, but one report carried the headline: “It is too early to be Santa’s sleigh, isn’t it?” That does not allow for training runs, of course, to get in shape for Christmas Eve. He is carrying a lot of weight, after all.

There are other theories about how Santa does it. The most disturbing is that there is not just one Santa, but millions of them, the strange products of inbreeding over the centuries, waiting incognito in every town and village until the moment comes to deliver, simultaneously. This still allows for the possibility of an Emperor Santa, elected or chosen by birth, ruling the North Pole. Is this the man I am holding the line for?

“Merry Christmas,” says a voice as deep and rich and warming as figgy pudding soaked in flaming brandy, with brandy butter and double cream on the side. It’s him. Suddenly I’m speechless. Santa, kindly as he is, breaks the silence with a disconcerting question: “Have you been good?” Erm… yes. No. Maybe. “I know the answer, of course,” he says. “We’ll have to see about you.” What is that accent? Scandinavian, American, Turkish, Old English, Argentinian… a bit of everything. “I like to ask the question as an ice-breaker,” he says. “You can’t very well ask children, ‘So what do you do?’ Hello? Are you still there, young man?”

This is staggering. This is Santa. The Santa. If there really are lots of them, an ancient family, this is the Capo dei Santa. Father Christmas, whatever you call him in your family. I really have to pull myself together. How do you… well, Santa, tell me, how do you do it?

He laughs – a fruity, lived-in laugh – then he answers. Well he doesn’t, to be honest, not really – but somehow, inexplicably, after talking to the man himself and hearing that voice, it almost seems enough. This is what Santa says: “Just believe.” 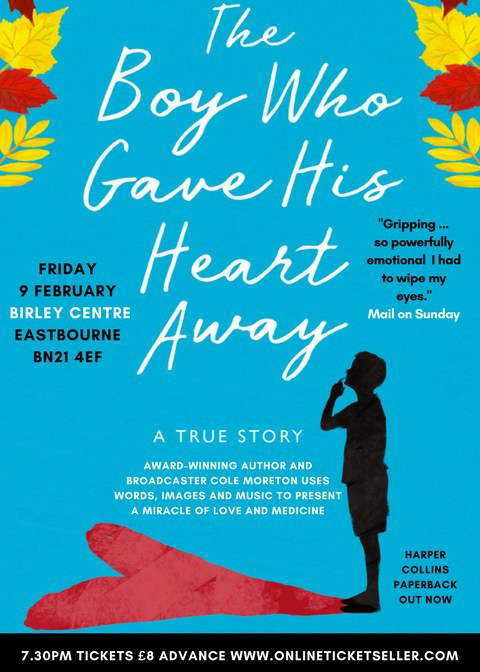 It’s my privilege to say that on Friday, February 9 I will be telling the incredibly moving true story of The Boy Who Gave His Heart Away on stage at the Birley Centre in Eastbourne, with some of the money raised on the night going to the Donor Family Network charity. Put on by Harry Farmer with excellent fellow writer Sheila Bugler part of the evening too. Please come if you can. Tickets are limited but they are available now from https://onlineticketseller.com/events/?id=1188&event=theboywhogavehisheartawaybycolemoreton

Marc is a promising young footballer of 15, growing up in Scotland. A few hundred miles away in England, Martin is a fun-loving 16-year-old. Both are enjoying their summers when they are suddenly struck down by debilitating illnesses. Within days, the boys are close to death.

Although their paths have never crossed, their fortunes are about to be bound in the most extraordinary, intimate way. One of them will die and in doing so, he will save the other’s life.

This is a deeply powerful and dramatic story. It is extremely rare for the family of a donor to have any personal contact with the recipient of their loved one’s organ. Yet remarkably, the mothers of these two boys meet and become friends, enabling the extraordinary, bittersweet moment in which a mother who has lost her son meets the boy he saved. Reaching out and placing her palm flat against his chest, she feels the heart of her son beating away inside another. Her boy, the boy who gave his heart away.

PUBLISHED IN HARDBACK, KINDLE AND AUDIOBOOK BY HARPERCOLLINS APRIL 2017 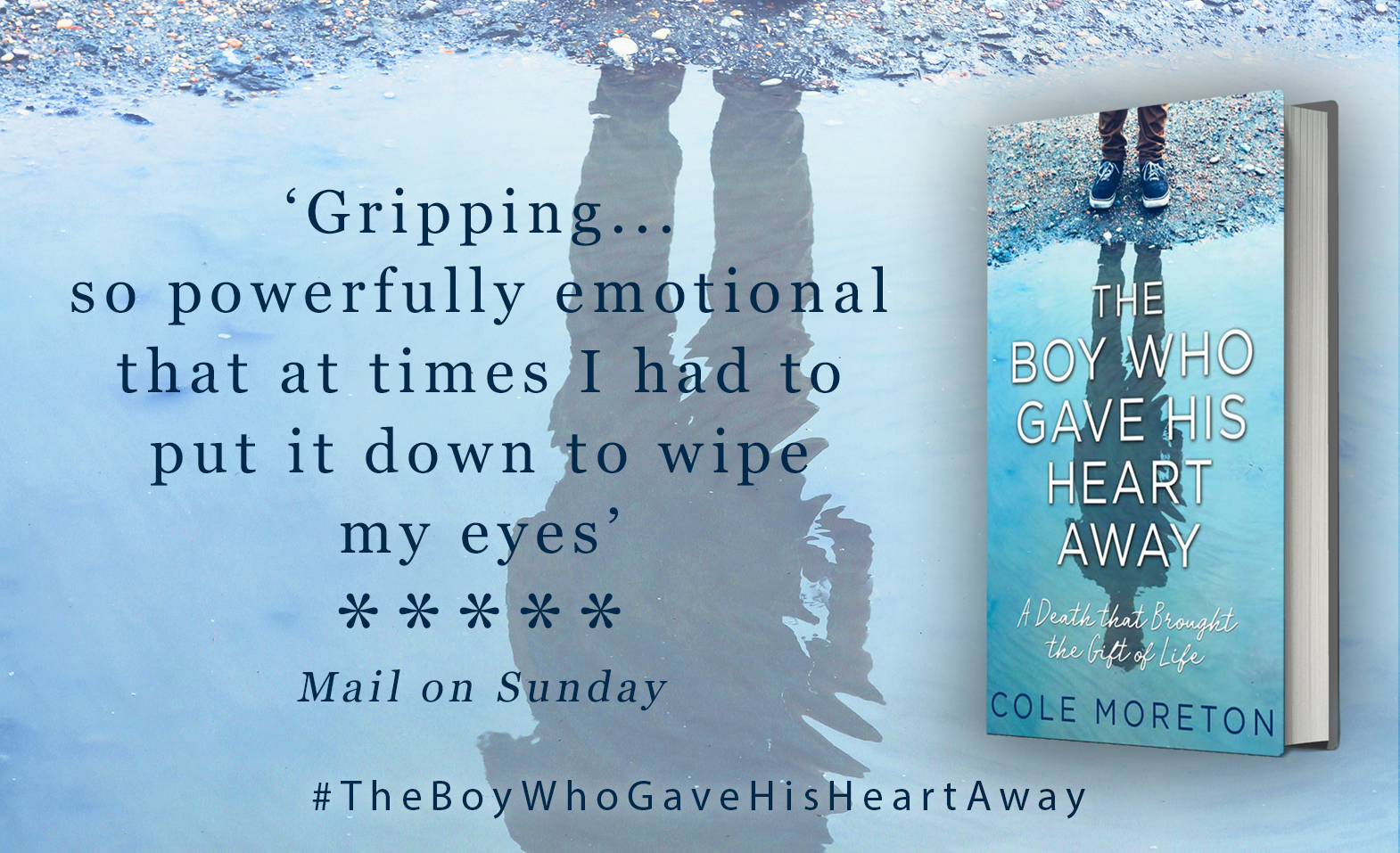 ‪Listening to The Adventure of the Lion’s Mane on @audible_com read so well by Stephen Fry I realise suddenly that #SherlockHolmes retired to the same #SouthDowns landscape that is the setting for my own story #TheLightKeeper, reviewed here by Anthony Horowitz. A blue plaque at East Dean puts him there, which is close enough, but a close listen to The Lion’s Mane suggests one of the farms nearer to Belle Tout.